There’s a motive that’s hiding in plain sight on this website. And it involves the unsolved abduction and murder of a 7-year-old boy. And that directly involves Tom Dillard. 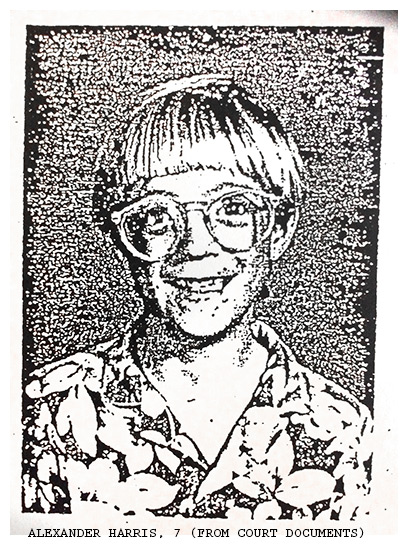 Dillard was one of the Las Vegas Metro detectives assigned to the case of Alexander Harris, 7. Young Alexander was visiting Whiskey Pete’s Casino on the border of California and Nevada over the Thanksgiving weekend in 1987. It was the Friday after Thanksgiving, Nov. 27, that Alexander, his mother Roxanne Harris, and Alexander’s grandparents had stopped at Whiskey Pete’s on their way home to Mountain View, Calif. It was a stop on a whim, just to let Alexander play some video games in Whiskey Pete’s arcade before being cooped up in the car for hours.

Alexander’s mom decided firmly that he could spend a half hour and no more playing games in the arcade, and then they would head back. And Alexander, as excited 7-year-old boys will do, jumped out of the car and rushed into the arcade to play games. It was about 10:30 am. It was the last time his mom and grandparents would see him alive.

At about 11 am, after gambling a bit in the casino, his mother went into the arcade to let Alexander know it was time to get on their way. Except she couldn’t find him. He was missing. She told security at Whiskey Pete’s and they searched the grounds. They could not find him. Then Las Vegas Metro police were called and a detail officer responded immediately. But the detectives who would normally respond to a kidnapping call didn’t arrive on the scene until Saturday.

They talked to witnesses who said they saw a boy leave the arcade with a man holding his wrist. They looked at very poor quality surveillance videotape from the arcade. But nothing they did led to the discovery of the boy.

About a month later, on Dec. 30, a groundskeeper at Whiskey Pete’s found the boy’s body under a temporary housing trailer on the casino grounds. He was wearing the same clothes he wore the day he disappeared. There was no sign of trauma to the body. The autopsy report speculated that he probably died around the time he disappeared and that the body had been where it had been found all along.

That didn’t make Metro or their investigating detectives look too good. So Metro assigned what they thought were two of their best homicide detectives to the case, Tom Dillard and Robert Leonard.

They proceeded to build a case around Howard Haupt, who was one of the men identified by eyewitnesses in the case; five people had said they remembered seeing a man leaving with a boy who looked to be about 7 years old at about the time the abduction would have occurred — sometime between 10:30 and 11 am. But it was a case built on forcing square pegs into round holes. In other words, the evidence just didn’t fit.

Dillard and Leonard lied about Haupt’s finger or palm print being on the glasses the boy was wearing. During Haupt’s arrest and interrogation, Haupt had given Dillard the name of someone who would provide an alibi for him — that they had been together land sailing on a dry lake bed at the time the crime took place. Dillard said he called and the acquaintance said he didn’t remember that. But Dillard had never even called this person who could provide an alibi. Dillard told Haupt there were five eyewitnesses who positively identified him as the kidnapper. However, the identifications were very shaky and Dillard knew it. Three of the witnesses had previously identified other people as being the abductor.

So through chicanery and other nonsense in trying to build a case around a man who was eventually acquitted of all charges, Dillard wasted valuable time and resources in trying to find the man who actually abducted and murdered the little boy. The real kidnapper, the real murderer, has never been found. And that’s just not right.

There were other theories, other potential suspects, other men to interview, other leads to follow up on. But there’s nothing now. No active investigation, no one in prison or on death row to pay for this heinous crime. Not even a paragraph about it on Metro’s unsolved homicide cases from the 1980s that they have on their website (1980-1989 unsolved cases). Nothing. THIS STILL REMAINS AN UNSOLVED HOMICIDE.

And that’s the real tragedy. A mother lost her 7-year-old son. There’s no price tag  you can ever put on that. So while we contend that Dillard has cost Las Vegas well over a million dollars as a result of shoddy investigations (and there will be more details to come about that), in our opinion, he’s really cost a bereaved mother the small satisfaction of knowing her 7-year-old son’s killer had faced justice and was paying for his crime.

This entry was posted in Blog, Victims. Bookmark the permalink.