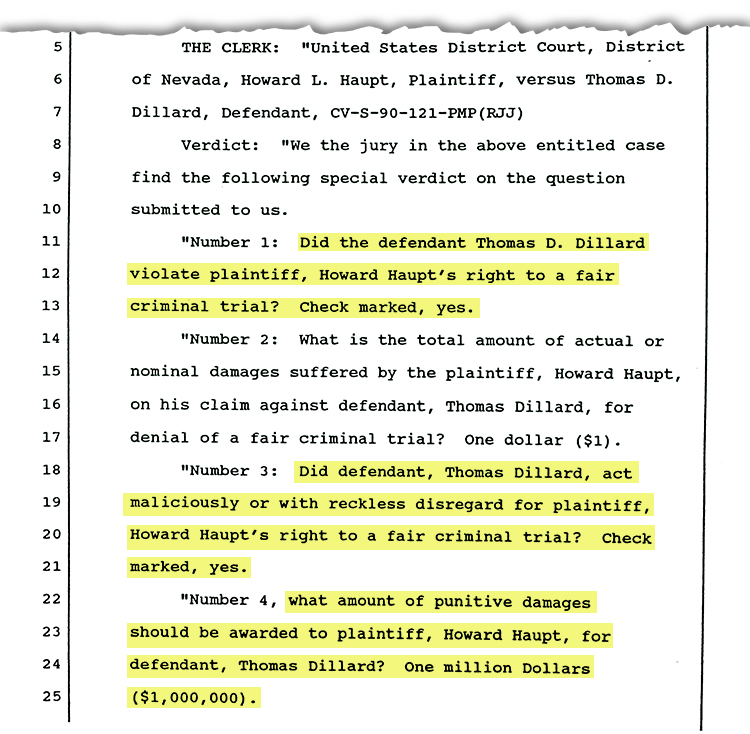 It doesn’t get any more clear than the one damaging page that you see above, which shows the jury’s findings in the U.S. District Court case (Nevada) between Howard L. Haupt (the plaintiff) and former Metro detective and defendant Thomas D. Dillard (Case No. CV-S-90-121-PMP(RJJ).

Dillard violated one of the basic tenants of police and legal proceedings: don’t call the judge hearing a case you’re involved with him and try to intimidate or influence anything he’s doing related to the case. The case brought by Haupt against Dillard stemmed from a previous case in which Haupt was arrested and charged with the abduction of a 7-year-old boy from Whiskey Pete’s Casino in State Line, Nevada, and about a month later was found dead under a trailer on the casino grounds. Dillard was one of the Metro detectives assigned to investigate the case. Haupt ultimately was acquitted, but not before Dillard called the judge to try to influence his instructions to the jury before they began deliberation on a verdict. The judge admitted that he felt intimidated by Dillard’s actions.

The summary document at top is from the Haupt v. Dillard verdict document, page 20. Ex-Metro Detective Thomas (Tom / T.D.) Dillard was found guilty on all four counts before the jury:
1. Violating Howard Haupt’s right to a fair criminal trial.
2. A finding in favor of the defendant for damages as a result of that violation.
3. Malicious or reckless disregard for Haupt’s right to a fair criminal trial.
4. Punitive damages as a result awarded to plaintiff Haupt for $1 million.

This entry was posted in Blog, Victims. Bookmark the permalink.